All this talk about lawsuits and collapsing HOA property values leads me once again to encourage you to get a copy of my new book, “Neighbors At War! the Creepy Case Against Your Homeowners Association.” I don’t care if you buy it, check it out at the library or steal it from your next door neighbor. There’s information in this book that you NEED TO KNOW!  All the five-star reviews on my Amazon page show that lots and lots of readers feel the same.

This is a preview of Please Excuse the Blatant Hustle. Read the full post (127 words, estimated 30 secs reading time)

The news from North Carolina sounded horrible at first. Twenty-one people were standing on the deck of a rental home on the Outer Banks when the deck collapsed. Most were injured and taken to the hospital. It could have been far worse, of course, but the final chapters haven’t been written.

This is a preview of Scary Reason To Live In A Homeowners Association. Read the full post (233 words, estimated 56 secs reading time)

20,000 people a month are now logging into NeighborsAtWar.com.  I like to keep you up to date on what’s going on in ‘HOA Amerika’, but keeping track of it all is a daunting job. So I want to invite each of you to consider doing a guest blog on situations with which you’re familiar.

Just a warning: I’m a tough taskmaster. After 40 years of investigative reporting and television news editing, I want total control over the final edited product. That’s because I have to take responsibility for what we publish. And I want to make sure each guest blog is short, pithy, to the point, and has punch. It has to be absolutely factual, and whenever possible, it has to link to an original published source.  This helps keep us out of legal hot water.

This is a preview of Want To Do A Guest Blog?. Read the full post (438 words, estimated 1:45 mins reading time)

John Potter, a 92 year old veteran of World War II is trying to stay in the house he built for himself 56 years ago. It only appraises for about $50,000.  Several years ago, Potter signed over his Power of Attorney to his daughter Janice Cottrill. Now she wants him gone even if she has to evict him. 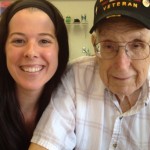 Potter’s granddaughter went on an internet crusade and raised more than $140,000 to shut her mom up. But even though that’s nearly three times the value of the house, Cottrill is going through with the eviction. She wants the old man on the street.

This is a preview of Want To Get Really Steamed Up?. Read the full post (119 words, 1 image, estimated 29 secs reading time)

While this blogger continues to be hypercritical of uninformed reporters, sometimes they actually do get it right when it comes to rogue HOAs.

At the links listed below, reporters and anchors with the ABC affiliate in Mesa, Arizona, knew how to ask the right questions and expose the contemptible HOA president of the Superstition Lakes Condos.

Seems that president Michael Cassady has asked his treasurer for lots of unusual ‘reimbursements’ supposedly for HOA board meetings. Things like vodka. Laundry detergents. Big restaurant bills. More liquor. In two years, $38,000 worth.

This is a preview of A Mess In Mesa. Read the full post (191 words, estimated 46 secs reading time)