Where is Uncle Billy Bob? Sounds like he was hired to restore the Heritage Landing Condos in Saint Charles, Missouri but has headed off to….fishing trip? Guadalajara? Elsewhere? Residents are living in hotel rooms but the contractor is MIA. Who hires these losers, anyway?

This is a preview of When the Aftermath is Worse than the Fire!!!. Read the full post (224 words, estimated 54 secs reading time)

The Texas Legislature has passed a bill to protect people who xeriscape their lawns from the HOA Lawn Nazis. If the Governor signs it, it’ll become law.

The tougher thing to understand is why Texas waited so long. The state is desperately short of water, it’s suffering under an ongoing drought. Clean drinking water is going to be the world’s challenge as environmental conditions continue to deteriorate under human stewardship.

The kind of bluegrass mandated by many Homeowners Associations is horribly thirsty. But Texas homeowners who try to conserve water have been harassed, fined and liened countless times over the years.

This is a preview of Tiny Improvement in Texas. Read the full post (149 words, estimated 36 secs reading time)

At ninety-one years old, a WWII veteran didn’t have a legal battle on his “bucket list.”

Thanks to his smart, love-filled granddaughter, Jaclyn and the outpouring of donations she acquired via the internet, John Potter will now get to stay in the Ohio home he’s lived in for more than half a century.

Thank you for your service to our great nation Mr. Potter. Because of you, the spirit of America has proven to still be alive.

Oh, and this time it wasn’t an HOA seizing a home. It was Potter’s only daughter! What a cautionary tale for all of us. 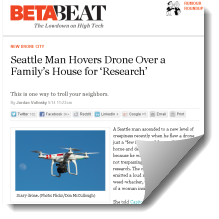 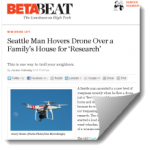 I’ve been predicting for a couple of years, now, that Homeowners Associations would eventually begin using drones to gather private information on members of the neighborhood. And they will.

The story linked below is about a Seattle man who used a camera-equipped drone to peer through a third story bedroom window of a neighbor. It’s beyond creepy. But it’s exactly what’s coming to a Homeowners Association near you.

If your HOA president hasn’t yet used a drone-carrying camera to spy on you, your lady friend, or your kids while they’re sitting in your private backyard hot tub, just wait.