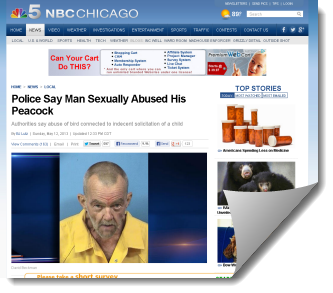 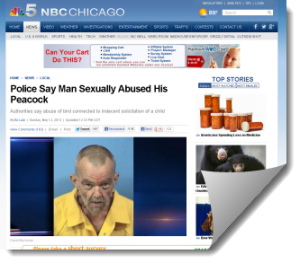 Sorry, this has nothing to do with goofy Homeowners Associations, it’s just about a goofy neighbor. And it’s so bizarre I can’t pass it up with comment.

Yes, there are unbelievably crazy neighbors out there. And they live just down the block from you! In a million years, you wouldn’t be able to predict how crazy they are.

LOL! I’ve been around peacocks. They’re nasty-tempered birds with a huge beak that can severe a man’s finger if not something else. It’s just a horrible shame this peacock didn’t have better aim against his owner.

Oh, we just seem to love it when we can celebrate the crash and fall of celebrities. I’ve never really understood that. When I come across a celebrity-bashing during my web browsing, I generally skip over it without looking.

But I did click on the link below while googling celebrities and Homeowners Associations. Seems that rythm and blues star, Chris Brown, has tried to express himself with graffiti on the exterior of his home. His Hollywood neighbors don’t like it.

This is a preview of On Bashing Celebrities. Read the full post (137 words, estimated 33 secs reading time)

Yep, the headline was for shock value. But that’s exactly how many Homeowners Association treat anyone in a minority group. Don’t believe it? Look at the deed to your own home. The chances are amazing your deed will reflect a history of bigotry against Negros, Jews, Orientals, and other minority groups. In fact, bigotry against minorities was absolutely the foundation of the modern Homeowners Association movement. It’s no coincidence the modern HOA movement was born just a few months after the 1964 Civil Rights Act.

This is a preview of Faggot!. Read the full post (194 words, estimated 47 secs reading time)

Neighbor disputes get incredibly nasty. But when one of the parties in a dispute is a bulldozer owner who’s a little mentally unbalanced, that’s when things get really bizarre.

I don’t know the background of this dispute. But a Port Angeles, Washington homeowner was so furious with neighbors that he used a bulldozer to raze their homes.

It’s not the first time a bulldozer has been used to settle a neighbor dispute, either. The last time this happened was in Granby, Colorado in 2006. Linked below are the stories on the Port Angeles, Washington bulldozer. The second linked is the 2006 Colorado bulldozer.

This is a preview of Enter the Bulldozer!. Read the full post (163 words, estimated 39 secs reading time)

The story linked below is more than confusing. But I’ll try to boil it down.

A dishonest developer (imagine that!) creates a planned community with all its customary HOA rules, doesn’t provide the promised amenities, goes bankrupt the day before going to court; now the community is stuck with HOA regulations and dues created by this creepy developer.

Kenneth and Linda Anderson developed the Arcadian Springs Village Property Owners Association in Andersonville, Kentucky. Now dozens of homeowners are whining that they got duped. They didn’t get the Utopian neighborhood they dreamed of.

This is a preview of What? A Dishonest HOA? Nawww!. Read the full post (252 words, estimated 1:00 mins reading time)