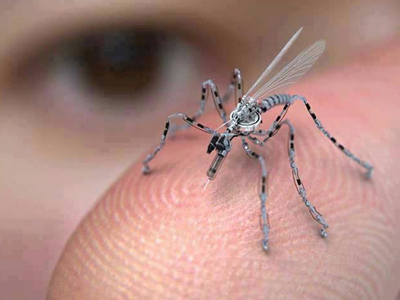 I don’t want to creep my friends out too much before our new week begins. But controversial news items keep piling up in my in-box, and they have to be cleared out sooner or later.

ITEM: 30,000 military drones are on their way to law enforcement outfits in America. It won’t be too long before extremely inexpensive drones are available to other government agencies to do aerial inspections of zoning violations. Now the Air Force is developing drones the size of a hummingbird, or even a mosquito. It’s not hard to imagine a mosquito flying through an open door or window and grabbing a microscopic piece of your DNA from bedsheets or clothing.

ITEM: New York City is first on the list to buy a sky full of the new drones. New York is also working with the Microsoft Corporation to develop a 30 million dollar computer/camera system that keeps track of everyone in New York ALL the time!

ITEM:  Gary Harrington, of Medford, Oregon, has just begun serving a 30 day jail sentence. His crime? Collecting rainwater and snowmelt that fell on his property. Oregon says it’s illegal to divert streams. Harrington’s argument that “diverting rainfall was not the same as diverting streams” fell on deaf ears in the courts.

ITEM: Martha Boneta owns a 70 acre farm where she grows vegetables. She has a permit to sell from a little farm store on her property. Her mistake is that she sells some souvenirs and trinkets and occasionally has pumpkin carving events and an occasional birthday party for her friend’s kid. But now she’s facing a $5000 fine for selling non farm items and not getting a permit for the birthday party.

CONCLUSION: Government is becoming more and more intrusive. Does it take any kind of imagination to see the day when HOAs can send drones over your property and in through the windows of your home looking for covenant violations? There’s already a case in Texas where an HOA president used a helicopter to photograph a resident’s back yard! Theoretically, we have a Constitution that prohibits unlawful searches of your property and belongings. But HOAs involve private contracts with homeowners. Your HOA doesn’t have to respect the restrictions in the Constitution.

Am I nuts about all of this? Not according to the link below.

Ward Lucas, author of Neighbors At War! The Creepy Case Against Your Homeowners Association