Tennis anyone?  Well, not for the past several years because the courts have been bolted shut.  The surface is broken and the weeds are growing wild up through the cracks.  When the courts were open they were enjoyed once in a blue moon by non-residents with Missouri plates on their cars.

On October 22, 2007 six of the board members signed and mailed a letter to every homeowner to defend their position against the petitions that had been signed by over 240 homeowners to recall the board.  In that letter they state, “They say we are also frivolous to buy wind screens for the tennis courts.”  And, then they go on to say that due to the foreclosures that would impact their revenue they voted “for,” but decided “against,” buying the wind screens and new nets. 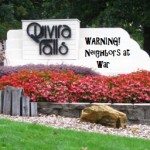 You bet there were homeowners opposing that ridiculous and unnecessary purchase because our townhouses were rotten to the point of having frame damage.  As a matter of fact, just four months after that letter was written the electric meters fell off my house because the siding and the structural frame was so rotten it just completely gave way.  This happened during a torrential rain storm and ripped two holes about the size of five gallon buckets in the back of my house.  Water was literally spraying out the electrical breakers on the wall downstairs and the water was gushing in under my new wood flooring, all over my new basement ceiling, down the walls, and running like a river across my brand new white berber carpeting and on across the basement to the drain in the utility room!  And there was absolutely nothing I could do to stop it.  My work order had been in for over two years for wood rot repair and it was met with nothing but totally goofy childish excuses.  When I told a board member I was going to hire my own contractor to repair the exterior of my house and apply the stucco, she told me…get ready now readers… brace yourselves………………..“If you hire your own contractors we are going to sue you and make you take the stucco off and put the wood rot back on!”  To this day, that is one of the most stupid things anybody has ever said to me in my entire life!

Back to the tennis courts.  One of the homeowners got ticked at the HOA and decided to report the tennis courts as abandoned property to the City of Overland Park.  Of course, I was notified of this because any time people are upset…I hear about it.

Nobody wants to raise hell with this HOA board because if you dare do it, there is hell to pay. Sheer hell.  Ugly hell. Hate-filled hell.  That treatment silences 99.999% of the homeowners.  They haven’t been blind to the treatment I’ve gotten by the board and their cronies so they are not marching down the “Nila Ridings Road.”  No sir, they value their quality of life and bank accounts far more than speaking out…thus, this HOA is a horrible nightmare!

Quite by accident I found the property manager on my driveway right after hearing of this report.  I decided since she was right here within two feet of me, I’d ask about the status of the tennis courts.  She told me it was CITY CODE that Quivira Falls had to have these tennis courts resurfaced or totally removed, including the asphalt.  The cost to remove the fencing and asphalt for both courts was going to be $100,000.00 and 1/3 that amount if they were resurfaced.  I was skeptical….my gut instinct and intuition was saying this “smells” rotten.  My call to the City revealed it is not City code for Quivira Falls to have tennis courts.  A plan can be submitted for something new in their place, OR they can be removed. BUT THE ASPHALT DOES NOT HAVE TO BE REMOVED!

I’m 99% sure I could find somebody that would take those fences down for free and haul them off and reuse them.  I know a few loads of dirt and some grass seed can be purchased for far less then $100,000.00.  And, in the end the HOA would save money by not having to maintain the courts, buy nets, or those wind screens that were voted on in 2007, the lights could be removed as well and probably sold, but certainly there would be no electricity burning and there would be no expense of changing the bulbs when they burn out.

I sent emails to the property manager and the board demanding this project be stopped so further discussion could take place before another $35,000 is wasted.  For those of you who don’t know this, my HOA borrowed $1M and most definitely it makes more sense to pay down debt then it does to resurface unused tennis courts! Nope, this CAI property manager is going forward with this project no matter what!

Did I fail to mention just a couple of years ago they built a fancy handrail down the steps to the tennis courts?  That’s right, it’s been the “staircase to nowhere” because once you walked down there you were “welcomed” with the padlock!

Homeowners are putting protest plans together.  It looks like ANOTHER war is about to begin in Quivira Falls!

Here’s the kicker…”Arizona Dave” just had the tennis courts at his condo complex resurfaced.  They are larger than the ones in Quivira Falls.  Dave’s association is managed by him, not a CAI property management company.  He emailed me the paid invoice….$12,000.