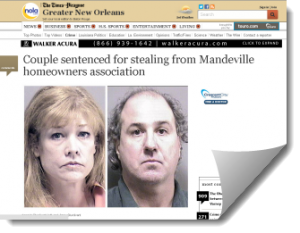 There are so many people who embezzle from their Homeowners Associations, that you just can’t keep up. I could probably do ten stories a day on these horrific crimes and not cover them all. But I will occasionally cover some of them just to give a few of these creeps a little extra face time.

This couple stole $200,000 from the timeshare group they managed. At least they’re going to get some quiet time…behind bars. But do you think that’ll stop other embezzlers? Not in a million years will these cheap little jail sentences create any deterrence factor for others. As long as the current HOA structure exists, board members, presidents and treasurers will continue stealing what usually is easy money.

Is it just me, or is it just generally hilarious when an all-white southern Country Club decides to become white-trash for just a day?

Yep, the good folks of the Country Club Homeowners Association In North Slidell, Louisiana are going to open their gated community for just a day so the po’ folk can come take advantage of their annual garage sale.

For some odd reason, Homeowners Associations hate solar panels. The hate the idea of solar energy. They hate people who don’t hate solar energy and they’re willing to sue into oblivion any homeowner who dares put solar panels on his house.

In Louisiana Governor Bobby Jindal signed an act permitting solar panels anywhere in the state. But the Azalea Gardens Homeowners Association in Shreveport apparently feels the law doesn’t affect them. They may be right, since they’re considered a private non-profit corporation. HOAs traditionally think that they’re above the law.

This is a preview of Solar Screams. Read the full post (130 words, estimated 31 secs reading time)