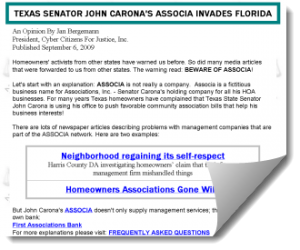 He’s currently free on $200,000 bond, which is a crime all by itself. But heck, California is so broke they can’t pay to feed one extra prisoner.  And with state finances in such bad shape, does anyone really think Barna will get any kind of prison term?  Ah yes, it’ll be a federal prison, not a California prison. But then again, aren’t the Feds about to “go over the financial cliff” in the current parlance?

Mark my words, Barna will get to keep the 950,000 bucks, he’ll get little or no prison time, the court will order restitution, and Barna won’t pay back a dime. The homeowners will be on the hook, though. Each homeowner who lives in a Barna-swindled association will be hit with a special assessment to make up the stolen money. Ain’t California great?

Oh, and I almost forgot. The owner of Barna’s company is Associa. Who or what is Associa? Well, Associa is owned by Texas Senator John Carona. Ask anyone from Texas.

Or better yet, let me link you to Jan Bergemann’s website where he discusses Associa in detail. And God bless you, Jan Bergemann!

2 thoughts on “Oh What A Tangled Web We Embezzlers Weave”

America will never be destroyed from the outside. If we falter and lose our freedoms, it will because we destroyed ourselves.