Having worked 44 years in news, and 40 of those years in television news, I can personally tell you, DON’T TRUST THE NEWS! Oh, believe me, I worked my heart out to get the facts straight and to write provocative stories but stories that were absolutely true, not shaded, varnished or tilted to one side or the other.  Were there mistakes? Sure. But once a mistake was detected, we went overboard trying to get the accurate information out there. For many years, a banner hung over our assignment desk that read “Be First, But Be Right!”

A competitor, Chuck Green at the Denver Post, was rumored to have a sign over his desk that read,”If your mother says she loves you, check it out.” The intent of both messages was, “if you don’t get the facts right, your career in the news media is dead!” That’s a tough standard.

But a television station in San Francisco, KTVU, will take decades trying to live down the monstrous mistake it made when trying to identify the pilots of the Asiana plane that crashed this week at the San Francisco airport. You’d better believe that five or six people were fired over this one The identification list started with Captain Sum Ting Wong: 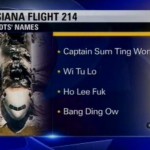