I swear, I’ve gotta quit doing stories about outrageous treatment of the American Flag, there are just too many of them. I could get stuck doing 12 or 15 stories a day. Still, I feel duty-bound to at least occasionally tell you when the latest cretin is pushing around his weight after having been given new power over other homeowners.

The latest victim of a flag outrage is a retired veteran named Larry Murphree of the Tides Condominium at Sweetwater, Jacksonville, Florida. It’s actually just a small flag that he placed in a flower pot on his porch. You can barely see it. It’s sticking in the flowerpot behind the right porch rail in the photo below. He’s been fined $8000 before and he got it settled in court. 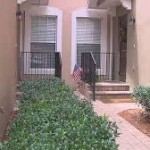 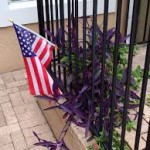 After his court victory, Larry replaced the flag. And once again he’s being sued for $8000 and confiscation of his home. Here’s a very tight shot to show you a real good closeup of this tiny flag.

“It’s worth fighting for,” says Larry. “It’s a small flag but it stands for a big thank you and it shows the love and respect I have for my country.”

Larry, a little advice here from someone who knows. It’s not about the flag. It’s about a brain chemical called Oxytocin. If you don’t know about it look it up. When a chimpanzee of either sex is placed in a cage with a bunch of other chimps at the zoo, there’s an immediate disturbance. The new chimp races around the enclosure showing off his or her ‘equipment’, spraying the cage, making other chimps a little frightful of his or her prowess. Jane Goodall spent a lifetime studying this kind of behavior in all kinds of primates.

Larry, you’re being victimized by a new board member who thinks his or her virility is a little more chemically tinged than yours. Or maybe this board member wants you to think his or her influence among the weaker members of the tribe will carry more weight on the evolutionary scale. Whether you’re an evolutionist or not, you cannot deny that chimpanzees share approximately 96% percent of their DNA with humans. They (and orangutans) are our closest relatives. In so many ways, they’re a lot like us and we can learn from them. Your flag fight is not about patriotism. It’s about simianism. It’s about oxytocin. It’s about sex.

All science aside, there’s perhaps a bit of usable truth here. Spread this blog far and wide around the Tides At Sweetwater condominium complex. Without putting yourself in a slander trap, figure out which tiny dickensonian creature has been causing you all this misery. The good women of the Tides at Sweetwater know that as a veteran you probably came from good genetic stock. They’ll respect you. Then gather the whole community’s support as they publicly and visibly show this ‘little’ simian how ‘little’ they think your challenger’s virility really is. Each hour of each day when those community members greet that simian they should hold up their fingers about one inch apart. It’s just a guess. Just to show how much that person is regarded in the community.

Most journalists won’t tell you all of this. But since I know a little about science I will.

(Fox News story (ignore the ad, they’re getting harder and harder to skip))

Please reach out to Larry and let him know this blogsite address so he can spread it throughout the neighborhood.

And here’s a quick link from him:

(let me fly the flag)

6 thoughts on “It’s Not About A Flag, It’s About Testosterone”