I’m not smart enough to know if anti-HOA activist Jonathan Friedrich will win his HOA lawsuit in Nevada. He claims he bought the house before the developer included it in an adjacent HOA. Friedrich says his home and several others were missed, and the paperwork was only recently filed. But more than anyone else I know in the country, Jonathan has chutzpah. 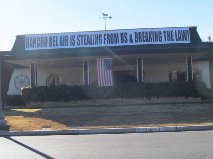 If your picture is a little grainy, it’s a 50 foot long banner that says, “Rancho Bel Air is Stealing from us and Breaking The Law!

Reminds me of the old advertising saying that goes:

“He who has a thing to sell and goes and whispers in a well is not so apt to get the dollars as he who climbs a tree and hollers.” Keep hollering, Jonathan. We hear you!

They who can give up essential liberty to obtain a little temporary safety, deserve neither liberty nor safety.