How to ‘legally’ discriminate against children in HOAs…… It’s pretty simple, and it only takes one word!

A Fair Housing case was just settled in Minnetonka, Minnesota. Six families in the Greenbrier Village Homeowners Association won a settlement agreement in a federal lawsuit. The feds say the HOA was violating the law when it banned children from playing in the grass.

The Greenbrier Village Homeowners’ Association and Gassen Company had to establish new nondiscrimination policies, pay a $10,000 fine to the federal government and $100,000 to six families for their illegal discrimination

How to legally discriminate? Just use one tricky word

Shortly after the Minnetonka settlement, HOA lawyers started sending notices to every HOA in the land warning about discriminatory rules and policies relating to children and families.

The legal advice was: “When drafting rules and policies, it is in the best interest of the community to use the word ‘All’ during the rule drafting process.” In other words, if you have a rule against ‘children’ riding bicycles in the common areas, you should replace the word ‘CHILDREN with the word(s) ‘ALL’ or ‘EVERYONE.’ Example: ALL residents are prohibited from riding bicycles in the common areas.”

Apparently, the Villas of Summerfield HOA, in Hilton Head Island South Carolina, took those HOA attorneys’ advice but added their own sneaky twist. 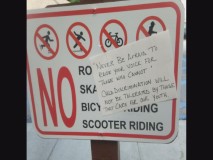 The sign says “No Rollerskating, No Skateboards, No Bicycle Riding, No Scooter Riding. Even though 99% of anyone doing those things are kids, the sign doesn’t specifically discriminate against children, at least according to the HOA lawyers. Still, is this keeping with the spirit of the Fair Housing Act?

This Hilton Head enclave may soon be another one that learns a very expensive lesson.

If you burn your neighbor’s house down, it doesn’t make your house look any better.