A wild story was broken this morning by the Las Vegas Review-Journal. A member of the Nevada state board which oversees Homeowners Associations says financial conflicts of interest on his own board essentially render it impotent and dysfunctional.

Jonathan Friedrich is one of the most prominent Homeowners Rights advocates in Nevada. Earlier this year he was appointed as one of seven members of the Commission for Common Interest Communities and Condominium Hotels. But Friedrich has been frustrated in his efforts to reign in some of the more outrageous behavior of many Homeowners Associations.

Nevada has some slimy creatures. But this one has finally been nailed by the U.S. Attorney. Las Vegas huckster Leon Benzer has at long last been indicted for leading the organized crime ring that bled untold tens of millions of dollars out of that state’s Homeowners Associations.

Benzer has claimed innocence all along. In fact, he’s now saying that he got personal approval for running his racket by the Nevada Attorney General. While that’s totally believable, the HOA scam was totally unbelievable. More than two dozen participants have already pleaded guilty to rigging HOA board elections so they could put phony straw men on the boards and divert millions of dollars to Benzer, a bunch of lawyers, a few police officials and a politician here and there.

This is a preview of THEY GOT HIM!!!. Read the full post (218 words, estimated 52 secs reading time) 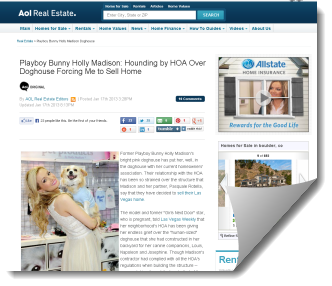 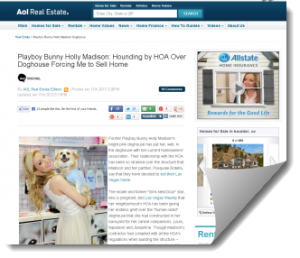 Former Playboy Bunny Holly Madison thought it would be a fun idea to build a doghouse perfectly designed to match her own home in Las Vegas. She even hired a contractor to make sure it was perfectly built.
Well, someone in the HOA was upset with the way something was built. And Holly is losing a Ben Franklin each month in HOA fines. Apparently, it wasn’t the doghouse that upset the local HOA. It was just the fact that it’s painted pink.
In any event, Holly is moving and taking her perfectly built doghouse with her. She may have trouble finding another home in Las Vegas, though. The only new housing there is under HOA control. And Las Vegas HOAs have a horrible reputation.
Holly?  Are you listening? Stay away from HOAs!
Read the original article here …
Permanent link to this post (148 words, 1 image, estimated 36 secs reading time)

Jeff German of the Las Vegas Review Journal is one of the few who’s done ongoing stellar work in reporting on the massive Nevada HOA scandal. If there are still any skeptics in America who think I’ve been exaggerating about the American HOA Movement being rife with old fashioned organized crime, then please follow German’s reporting.

Kudos, once again, to Las Vegas reporter Darcy Spears. Her latest expose’, though, makes me want tear someone’s eyes out of their head.

Vegas is sort of the center-of-the-world for corruption among HOA boards. But the latest crimes are the ones committed against children. 10 year old Paul Busch has been banned by the Central Park Homeowners Association  from playing in any of the common areas for the next six months. His crime? A board member claims he saw Paul and a friend break a sprinkler head. There’s no proof of course, except the word of this board member. Well, I take that back, there was another witness who specifically said the boy didn’t do it.

This is a preview of A New Selling Point for the Central Park Homeowners Association. Read the full post (166 words, estimated 40 secs reading time)