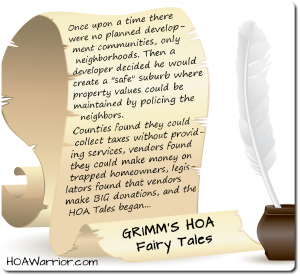 East Texas, Big Woods Springs HOA is a relatively small community of 85 homes, with low assessment payments of $35 per month. They need the money to maintain their road, a small bridge, and a dam for their lake. Homeowners have just been “blindsided” by the theft of $31,000 from their HOA.

The theft allegedly occurred over a 26-month period, by their neighbor and former Treasurer, Letha Anna Thomas. Owners became suspicious when their repeated requests to see financial statements were ignored.

The new Board members vow to operate with transparency, and intend to conduct background checks on all future Board candidates.

I told you last year this was coming. John Carona, the Texas State Senator who lost his seat in the last election would be buying some banks. During his years in the Legislature he was criticized for writing, lobbying for and passing laws designed to benefit the HOA business.

Carona tightly controls more than 8000 Homeowners Associations through his company, Associa, making him the largest HOA management firm in the country. Residents of many Associa HOAs have complained bitterly about how difficult life is in these beige compounds. Last year a newspaper talked about how Carona was buying up unrelated businesses surrounding his compounds making it difficult for homeowners to shop at non-Carona controlled firms.

This is a preview of What a Great Place for a Banker!. Read the full post (186 words, estimated 45 secs reading time)

I’d love to call this one a scam, but there isn’t enough information to make that kind of allegation. It’s just too bizarre. The City of McAllen, Texas, charges each resident an extra ten bucks on their water bill, supposedly collected on behalf of Homeowners Associations. Theoretically, that money is supposed to go to HOAs for maintenance. But nobody seems to be getting the maintenance or the money, and the City of McAllen has no idea where the money is going. There’s never been an audit. Money is even being collected from homeowners who live in neighborhoods where the HOA has been dissolved. We may be talking about millions of dollars, here.

This is a preview of So You Think You’ve Heard Everything?. Read the full post (121 words, estimated 29 secs reading time)

Since we seem to have tens of thousands of people who log in here regularly, I try to keep a running chart of adjectives and descriptive words that embattled homeowners use for abusive HOA board members and managers. A frequent one that comes up is ‘rattlesnake’, as in “my board president is as dangerous as a rattlesnake.”

Really, that word comes up a lot in your emails and in news stories about out-of-control HOAs.

So I YouTubed the word and came across a funny video that’s been viral several times over the past few years. As you watch this, just remember that sometimes the Good Guy wins!

This is a preview of Just To Make You Laugh!. Read the full post (115 words, estimated 28 secs reading time)

They who can give up essential liberty to obtain a little temporary safety, deserve neither liberty nor safety.